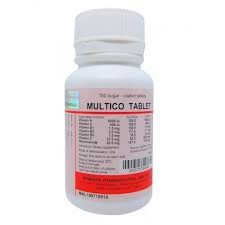 Indications/Uses
As a dietary supplement.

Dosage/Direction for Use
Oral administration.
One tablet to be taken daily.

Overdosage
Symptoms of overdosage of vitamin A are similar to those of hypervitaminosis A mentioned under adverse reactions.
The treatment of hypervitaminosis A consists of immediate withdrawal of the vitamin along with symptomatic and supportive treatment. Most signs and symptoms disappear within a week, but hyperostoses remain evident for several months after clinical recovery has occurred.
Overdosage of vitamin D can cause hypercalcaemia, hypercalciuria and hyperphosphataemia Treatment of hypercalcaemia and overdosage: The treatment consists of immediate discontinuation of the vitamin. Serum calcium measurements should be performed regularly until normocalcemia ensues. Hypercalcaemia normally resolves in two to four weeks.
Treatment of accidental/acute overdosage: The treatment of acute accidental overdosage should consist of general supportive measures. If drug ingestion is discovered within a relatively short time, induction of emesis or gastric lavage may be of benefit in preventing further absorption. If the drug has passed through the stomach, the administration of mineral oil may promote faecal elimination. Serial serum calcium determination, rate of urinary calcium excretion and an assessment of electrocardiographic abnormalities due to hypercalcemia should be obtained. Discontinuation of supplemental calcium and low calcium diet are also indicated in accidental overdosage. Should persistent and marked hypercalcemia occur, the use of drugs such as phosphates and corticosteroids as well as measures to induce an appropriate forced diuresis may be considered. The use of peritoneal dialysis against a calcium free dialysate may also be considered.
Adverse effects arising from overdosage is remote, as these are water-soluble vitamins, they are not stored to any significant extent in the body. Any excess are readily excreted.

Contraindications
It is contraindicated in patients who are sensitive to any of its components. It must not be taken in hypercalcemia or hypercalciuria.

Special Precautions
This product is not intended for treatment of pernicious anaemia. Neurologic involvement may develop or progress despite temporary remission of anaemia. This product is not intended for the treatment of severe specific deficiency.
Toxicity manifestation of vitamin A depend on the age, dosage units and duration of administration.
Acute toxicity: single dose (25,000 units/kg body weight).
Infants: 350,000 units.
Adults: over 2 million units.
Chronic toxicity: (4,000 units/kg body weight for 6 to 15 months).
Infants 3 to 6 months: 18,500 units per day for one to three months.
Adults: 1 million units daily for three days or 50,000 units. daily for longer than 18 months or 500,000 units daily for two months.
Ascorbic acid could be partly metabolised to oxalic acid. Average reported production rates were 1mg oxalate from 1g, 12 mg from 4g, and 69mg from 9g, but with wide individual variations.
Some patients would have a high risk of renal calcification during treatment with high doses of ascorbic acid.
Tolerance may be induced in patients taking high doses. When daily ascorbic acid intake significantly exceeded 250mg for prolonged periods, the rate of clearance from the body increased so that blood concentrations did not increase with larger doses. Dependence on larger than normal maintenance doses could occur and deficiency might occur if treatment was withdrawn. Ascorbic acid can cause chemical interference in laboratory tests for blood or urine creatinine, glucose and uric acid. It is reported that mean plasma ethinyl-oestradiol concentrations were increased by 16.3% and 47.6% six and 24 hours respectively after ingestion of ascorbic acid. The overall effect of a large Vitamin C supplement in patients on contraceptives is the conversion of a low oestrogen oral contraceptive into a high-dose contraceptive. Ascorbic acid in large doses might obscure the diagnosis of gout or in some patients it might precipitate acute gouty arthritis.
Review