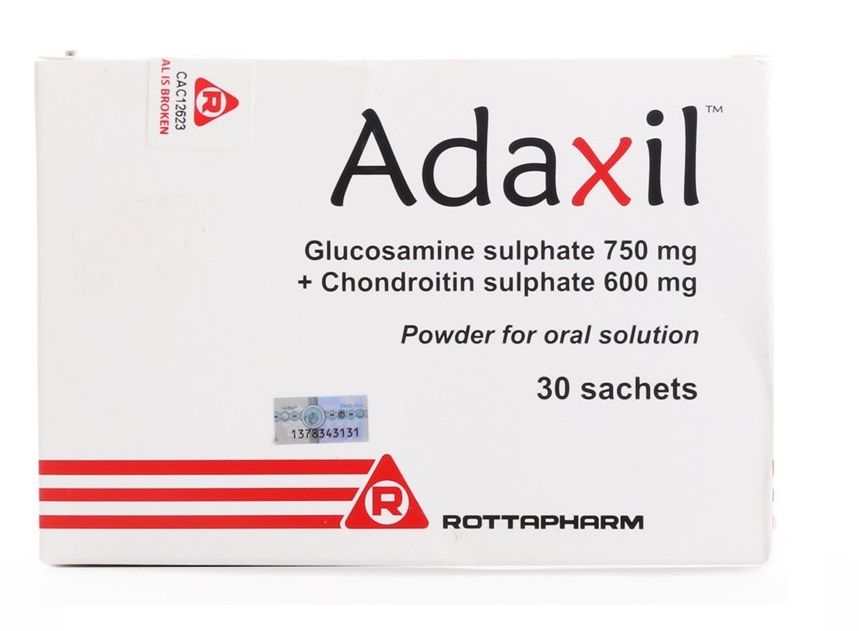 Indications/Uses
Treatment of the symptoms of osteoarthritis ie, pain and function limitation.

Dosage/Direction for Use
Two sachets daily, preferably at meals. Adaxil must be dissolved in a glass of water before oral administration.

Overdosage
No cases of accidental or intentional overdose are known. The acute animal and chronic toxicological studies of Adaxil active ingredients indicate that toxic effects and symptoms of toxicity are not likely to occur, even after high overdoses. However, if overdose occur the treatment should be symptomatic eg, hydroelectrolytic balance restoration.

Contraindications
Hypersensitivity to chondroitin sulfate, glucosamine sulfate or to any of the excipients of Adaxil.
Adaxil contains sorbitol 1163 mg as excipient. Therefore, patients with rare hereditary problems of fructose intolerance should not take Adaxil.
Adaxil is not indicated for the treatment of acute painful symptoms.
Since glucosamine is derived from seafood (shellfish), Adaxil should not be given to patients who are allergic to shellfish.

Special Precautions
Adaxil contains sodium and needs to be taken into consideration by patients on a controlled sodium diet.
In patients with cardiac and/or renal insufficiency, edema and water retention was observed very rarely. This effect could be attributed to the effect of chondroitin sulfate. The administration of Adaxil to these patients should be under strict medical supervision.
No special studies were performed in patients with hepatic insufficiency. The administration of Adaxil to patients with severe hepatic insufficiency should be under strict medical supervision.
Caution is advised in treatment of patients with impaired glucose tolerance. Closer monitoring of blood sugar levels may be necessary at the beginning of treatment.
An increased effect of coumarinic anticoagulants (eg, warfarin) during concomitant treatment with glucosamine sulfate, one of the active ingredients of Adaxil may occur. Therefore, a closer monitoring of the coagulation parameters may be considered in those patients being treated with Adaxil.
Due to its chondroitin sulfate content, in case of concomitant administration of platelet anti-aggregant drugs eg, acetylsalicylic acid, dipyridamole, clopidogrel, ditazol, trifusal and ticlopidine, Adaxil should be administered under strict medical supervision.
Concurrent treatment with glucosamine sulfate may increase the gastrointestinal absorption of tetracyclines. Caution is advised in case of concomitant administration of Adaxil and tetracyclines.
The colouring agent sunset yellow (E110) may cause allergic reactions.
Effects on the Ability to Drive or Operate Machinery: No important effects on the central nervous system or motor system are known that might impair the ability to drive or use machines. However, caution is advised if somnolence or visual disturbances are experienced.
Use in pregnancy & lactation: In the absence of studies on reproductive function in humans, the use of Adaxil during pregnancy and lactation should be avoided.

Use In Pregnancy & Lactation
In the absence of studies on reproductive function in humans, the use of Adaxil during pregnancy and lactation should be avoided.